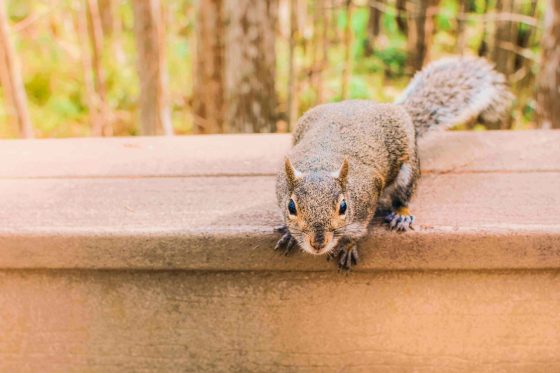 Photo by Sarah Brown on Unsplash

Squirrels are wild animals and should be treated as such. Many people all over the world think they are cute because of their adorable faces and big fluffy tails, but a fact is a fact. They are not domesticated animals and they are not used to human presence. On rare occasions, if you feed squirrels often they may pluck up the courage to get close to you or even eat from your hand. However, if they also feel threatened, they may attack you, your child, or your pet.

Are Squirrels Dangerous to Humans?

There are several reasons why these adorable-looking rodents can be threatening and inflict harm to humans. In the UK, we consider grey squirrels an invasive species, and they are the most common intruders.

Here are the main reasons why we control grey squirrels:

The population of the red squirrel is now mainly found in Scotland. Out of their approximate number 160 000, about 120 000 are on Scottish territory. This means that in England, you’ll hardly see them in an urban setting. Unlike the grey squirrel, the red prefer living in forests and parks. Their preferred environments are coniferous woods and are rarely found in broad-leaved forests. Red squirrels are considered more aggressive than their grey brethren. They are very territorial and protective of their food and babies. They may attack humans, other animals, or even other red squirrels.

However, if red squirrels are common where you live, they may be more of a problem for your house. If they find a way in your home, they can cause structural damage, chew on electrical wires, make a nest on your property, leave droppings, urine, or just chaos from rummaging for food. If you are suffering from a red squirrel invasion, you must contact your local council. These animals are protected by law and you are not allowed to trap or kill them.

No, but they are super adorable. A baby squirrel regardless of the species isn’t dangerous to humans or pets. If you find a fallen newborn in your yard, you can pick it up and take it to a vet without worrying about your health. It is not uncommon for people in England to find fallen babies because squirrels may nest on trees in your yard.

No squirrel species is aggressive by nature. However, they are wild animals and if they feel threatened by you or another animal, they may bite as a defense mechanism. Even domesticated pets attack if they feel unsafe. As a rule of thumb, you should know not to try and pick up wild animals, including squirrels. It is very likely that this would make them feel endangered and they will protect themselves.

Squirrel bites can be dangerous if the creature has rabies. If not, squirrel bites aren’t very alarming. If you get bitten by a squirrel, make sure to do the following:

These will prevent the wound from developing an infection which can become mildly dangerous if it’s not treated on time.

Are squirrels dangerous to dogs?

If the squirrel has rabies, it can be dangerous. Take your dog to the vet immediately. However, keep in mind that these are super rare occurrences.

Yes, they carry a number of diseases but only a few of them can be transmitted and are dangerous to humans. The most common ones include tularemia, salmonelosis, typhus, and ringworm. These diseases are transmitted through different forms of direct contact with infected squirrels, like bites. Squirrels also carry a number of parasites which can be left behind on your property, yourself, or your pet. Such are ticks, fleas, mites.

What Diseases Do Squirrels Carry?

As we said already, squirrels do carry and may transmit several diseases.

The short answer is no. These two are the main squirrel species in the UK but they do not live in symbiosis. Grey squirrels in the UK do not actively seek out red squirrels and attack them with the sole purpose of killing them. This is simply not the case. The reason why the red squirrel's population is reduced is that they have more trouble breeding due to various reasons and are more affected by diseases. They die off at a faster rate than they reproduce.

Squirrel pox is a virus that can be transmitted from grey to red squirrels. However, the grey rarely dies from it. They are just the carries but for the red, it is one of the main reasons for their population decline. The virus may cause skin ulcers, lesions, or scabs. Also, swelling and discharge near the eyes or mouth. Animals that fall victim to this disease become increasingly lethargic as it progresses and eventually dies.

Are All Squirrels Vermin?

Here in the UK, grey squirrels are considered a pest. In fact, they are one of the most common pests on the island. They can cause damage to trees in your yard and even your home. What is more, they often enter attics, lofts, or your kitchen through an open window and steal your food. Some of the damages they do are chew wires and wall insulation. Also, they can leave urine or droppings behind which is never a pleasant thing to deal with.

To sum up, squirrels may come near you if you offer them food but they won’t be quick to attack you. Unless you try to catch them or hurt them and they feel threatened in which case they will bite and scratch. If you have children and pets, you may want to keep them away from any wildlife animals, including squirrels.

Regardless of how cute and fluffy they may look, safety should always be a priority. And if you’re not a fan of squirrels but they are tormenting your home, you should hire professional pest controllers to fix the problem. Fantastic squirrel control experts follow all rules and regulations when treating squirrels on your land and property.

Squirrels on Your Property?

We are a pest control company. We produce informational content only. We do not give medical advice. Contact your doctor if you are bitten by a squirrel.