Moths are flying insects, closely related to butterflies. They come in many different shapes and sizes. Unlike butterflies, most moths come in earth, muted colours—brown, white, grey or black. Their wings are covered in scale and usually don’t exceed 70 mm wingspan. Indoor moths in UK areas are rarely larger than 20 mm, although there are outdoor species which can reach up to 120 mm. Unlike butterflies, moths rest with their wings flat. They also appear to be “furrier” and “fatter” than butterflies.

Moth larvae are called caterpillars. They look like hairy worms and are sometimes mistaken for centipedes or millipedes. They have segmented bodies which consist of a head, thorax and abdomen. The majority of caterpillars are brightly-coloured although they blend with their surroundings very well. 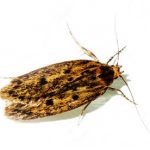 The Brown House Moth is a scavenger which feeds on wool, cotton and other types of cloth. It reaches up to 26 mm and has a slender, yellowish body. It is a common invader inside houses and lives everywhere in Britain, except for the northernmost regions of Scotland. 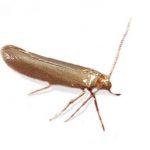 Another moth you may find in your home is the Common Clothes Moth. It has a smaller body—6 mm-8 mm—and the edges of the upper pairs have a “rugged” appearance. Their larvae feed on fabrics and leave irregularly-shaped holes. 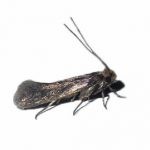 Case-bearing Clothes Moth is 6mm-8mm long and coloured in dark, earthy tones. It is much rarer than the Brown house moth and the Common clothes moth but it is still possible to spot one in your wardrobe. 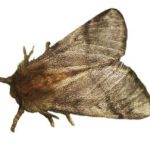 The Oak Processionary is an invasive species. While the adult poses no threat to humans, their caterpillars have venomous hair-like appendages which remain toxic for years after the fall of the body. The venom causes severe irritation, redness, swelling.

All moths are prey to other predators. Lizards, birds, spiders and even plants feed on different species of those flying insects. Some moths have developed defence mechanisms against such threats. Many caterpillars use deception—they have fake “eyes” painted on their thorax to appear menacing. Other are downright toxic and have venomous hair-like segments, protruding from their thorax. Some emit an unpleasant scent and some even hiss.

Many caterpillars are social and live in colonies. However, moths are not gregarious.

Although nocturnal moths are active during the night, they are still attracted by light and are known to fly around light sources such as lamps, torches and even TV screens. Clothes moths, however, are not nocturnal and actually stray from the light. They prefer dry, dark locations, such as attics and closets. They hide in the corners making them hard to spot until the population has already infested your property.

Difference between moths and butterflies.

How long do butterflies and moths live?

What do moths eat

It is impossible to generalise the diet and behaviour of all moth species. Some species feed on pollen and fruit juices while others are predators and prey on smaller insects. The majority of moths are considered agricultural pests. The main food for moths in your home include clothing, furniture and carpets made of: wool, cotton, fur, cashmere, silk, linen, alpaca, hemp, flax.

Read more: What damage do moths cause?

Actually, it’s not the adult moth that eats your clothes, but its larvae. They eat anything organically based – cotton, fur, hair, wool, cashmere, even your carpets. And if they don’t have access to that, they would eat through non-organic materials to get to the organic ones. In other words, plastic bags would not protect your clothes from the moths' larvae.

Pro tip: larvae and moths are attracted by moist and sodium found in salt and sweat. What has both those things? Dirty clothes. So never put dirty clothes back in the closet unless you want to attract moths.

Read more: How to get rid of moths?

There are some species of moths who are venomous to humans. The rule of thumb is any caterpillar that looks hairy is to be avoided. The infamous Oak Processionary has seen a population boom in South-East England since 2006. The slightest contact with its hairy segments causes allergic shock, rash, conjunctivitis and pharyngitis. A severe reaction includes asthma and anaphylaxis.

The bodily fluids of the Garden Tiger Moth are toxic if ingested—something your pet dog might do. There are also other types of poisonous moths or caterpillars but they do not pose a threat.

What to do in case of a moth infestation

Your quick actions might help you minimise the damage caused by the cloth-eating moths:

Are you suffering from a moth infestation?

We only aim to provide some helpful facts about moths species. We don't provide any medical advice.