We will take a look at one of the deadliest vermin in the UK — wasps. People usually associate stinging insects with bees but wasps cause 200% more death cases than their honey-making cousins. We’ll tell you all about what attracts wasps to your home and 6 tips on how to avoid wasp stings.

Types of Wasps in the UK 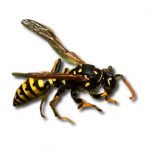 They are the most common species of wasps in the UK and the first association of most people when they hear that word. They attack in swarms without warning and can chase their prey up to a few hundred metres. They have a great sense of smell which allows them to ruin your outdoor summer picnic. German wasps reach 18mm in length. 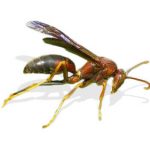 They are closely related to German wasps but prefer to live outside rural regions. They stray from human settlements and can be easily found in nature—especially in forested areas. They construct their nests underground which makes them extremely dangerous for hikers. If a person steps on the entrance of a red wasp nest, the hive will perceive him as a threat, become aggravated and attack him immediately. 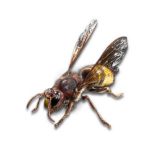 They are the only type of hornets in the UK. Their stings are much more painful and venomous than the stings of other wasp species. They are also larger in size and can reach up to 40mm—as large as a human thumb. Thankfully, they are quite rare in Britain and their hives are smaller in size.

Many people find it hard to differentiate yellow jackets — the most common wasp species in Britain, from bees. It is extremely important to be able to tell the difference between both.

Wasps in the UK are coloured in bright yellow and shiny black and lack the distinct “hair” of bees. Their bodies are larger, slender and slicker. They have a narrow waist that connects the two segments. In-flight, wasps leave their back pair of legs hanging in a specific manner.

Yellowjackets live in colonies and hunt in packs. Each year the colony is re-established and can quickly reach its maximum size of 5,000 to 6,000 specimens in spring, and up to 20,000 in summer. Almost all wasps people encounter are female as males are used only to fertilise the queen.

All wasps are hunters and scavengers. They collect caterpillars for their larvae and feed on rotting and fresh sweet fruits, nectar and even meat. They are also attracted by carrions and offals. Some wasp species can even make honey.

The majority of wasps that can be found around the UK are social wasps. This means that they live in nests.

A wasp's nest is constructed of chewed wood and plant fibres which are bonded by the wasp's saliva. The wasp's nest is home to worker wasps, male drones and a single egg-carrying queen. Most wasp nests die off with the drop of temperatures in autumn but some may survive if the weather conditions are favourable and the nest is located in a dry place close to a food source.

Unlike bees, wasps can sting numerous times without experiencing any harm. Their stings are dangerous as they inject venom into your body. Around 10% of people are allergic to this venom. It’s crucial to learn how to avoid wasp stings as the stings cause swelling, redness, lymph nodes inflammation and rarely rashes.

The venom injected with the sting breaks down cell membranes, which causes us to experience extreme pain. Allergic people develop a symptom that is known as “large local reaction”. This reaction is associated with increased swelling and a prolonged recovery period. Multiple stings can cause severe damage to both allergic and non-allergic individuals.

Wasps have powerful mandibles which they do use to bite humans. Although wasp bites are not venomous and are unlikely to kick off an allergic reaction, they are painful enough on their own. Wasps are powerful enough to bite off small chunks of skin.

How to avoid wasp stings?

Bonus: Wasps are territorial so if you place a fake wasp nest on your yard, they will avoid your property.

Wasp stings should be treated immediately to prevent a large local reaction. A popular and efficient DIY method is to rub fresh garlic onto the wound. You can also apply a cold pack to it to reduce the swelling and pain. Also, keep the stung area clean and disinfect it once a day until the inflammation disappears. In case you continue to experience severe pain, consult your MD for the need for medication.

Although painful, wasp bites do not need to be treated.

It goes without saying—wasps are extremely easy to notice. Their distinct flying patterns, buzzing sound and behaviour make them impossible to miss and usually cause us to panic. To ensure you don’t encounter vespine insects this way, it is a good idea to check for their nests in late summer or early spring. In the beginning, their nests are the size of a walnut but reach the size of a football by late spring. Nests can become as big as a human being—an uncommon sight but not rare.

Wasps build their nests in dead tree trunks, hollows in the walls, attics, fascias and air bricks. Check those areas of your premises for any wasp activity. In spring wasps are not as easily aggravated as later on. This will save you a lot of stress and possible stings.

Sadly there is little you can do to prevent the occurrence of wasps. As we discussed above, you can check in the beginning of summer for wasp nests—yet this will not stop them in any way. The most efficient method of wasp prevention is to ensure there are no food sources around your property.

This includes not letting your trash bin to overflow as wasps feed on rotting vegetables and fat residue. It is also a good idea to seal any hollow areas where vespine insects can construct a nest in.

Wasps are not exactly a resilient pest and can be easily exterminated with domestic-level insecticides. The problem is they become easily aggravated and will attack immediately after the first sign of a threat.

You should never try to remove a wasp nest by yourself—unless the size of a walnut. Not only will you put yourself at risk but your whole neighbourhood as well.

What to do in case of a wasp infestation

Nest treatment is a delicate task that requires professional experience and equipment. Do not attempt by yourself.

Want to get rid of a wasp nest?

Keep in mind that we only aim to provide some useful information about wasps in general. We cannot guarantee that the insects you're dealing with corresponds to the same description and are exactly the same.