Bees are flying insects closely related to ants and wasps. There are many different types of bees, the most popular (but not most numerous) of which are the honey bees.

All members of the bee family can be recognised by their dual pair of transparent wings, short, stocky bodies, and stingers. Honey bees are small, social insects that reach up to 22 mm. Unlike wasps, they have hairy, robust bodies with a wide waist. They are coloured in black and yellow stripes, but the yellow is less vivid than the yellow stripes on wasps. 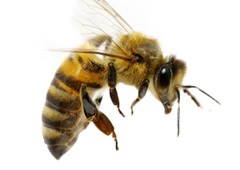 A slender wasp-like body covered in striped colouring. Females have a distinctive barbed stinger. A honeybee is more likely to sting you than any other bee in the UK. These bees sting when they see you as a threat to their honey and nest, which could be at any time you stand between them and their nest, cast a shadow on it or cause the ground around it to vibrate. 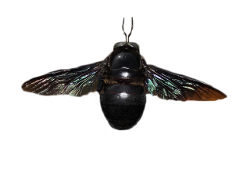 Other social bee species build colonies in specific locations. For example, Carpenter bees burrow in deadwood where they build their nests. Also, there are parasitic bees that mimic the appearance and scent of other bee species. 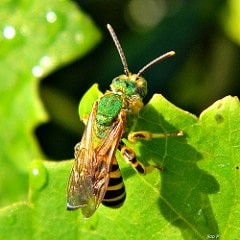 On their upper body, sweat bees have very characteristic metallic colouring. They are attracted to human sweat and might be observed attempting to lick the sweat off a person’s body. 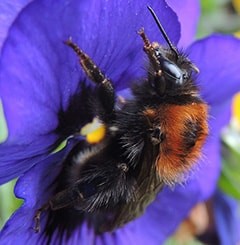 Orange patch on the upper body and dark colouring along the body. Often possess a white tip at the ‘tail’. Tree bees are known to be more aggressive than other bumblebees and could sting people around their nest. However, their sting is considered to be less painful than that of a honeybee or sweat bee.

Dr Schmidt spent over a decade examining the effects of insect bites and stings. His writing style is remarkably candid and at times, almost poetic.

The Schmidt sting pain index is a pain scale that rates the degree of pain caused by different hymenopteran stings, including bee, wasp, and hornet stings.

Schmidt's Sting Pain Scale is organized into four levels, with level four being the most painful.

Honey bees are not considered a pest. They aren’t just beneficial to humans—they are of huge importance to the existence of life on earth. Bees are the prime pollinator of flowering plants.

However, they are still regarded as a wildlife nuisance. Feral bees often settle in human-made structures, especially in suburban areas and close to farmlands. They have venomous stings which cause irritating pain. Bees also emit a pheromone that is calling other members of the hive to attack the stung intruder. In severe cases, a bee sting can cause an allergic reaction, asphyxiation, swells and even death.

Bees also express swarming behaviour. When a new queen is hatched, the old one leaves the hive, along with thousands of workers and drones. In search of a new place to call home, the swarm of bees behaves more aggressive than usual and is known to attack people if threatened. Still, such accidents are rare occurrences.

Don’t worry—even if your home is infested with bees, there is rarely any immediate danger to you or your family. To reduce worry, read more in our ‘Which bees sting’ section. Still, the problem must be dealt with to prevent future complications.

If you spot a few bees flying around your front yard, there is no need to panic. Bees in your garden are not only normal, but needed for the reproduction and normal development of your plants. Regular sightings, on the other hand, might indicate a problem. If you need to look your step not to run into one—you definitely have a feral bee hive nearby. Check your premises’ structures for any openings where bees go in and out. The hive might also be outside, especially in upper corners and areas protected by rain and predators.

You might also run into a Carpenter bee nest. Carpenter bees differ from regular Honey bees—they are not domesticated, they do not produce edible honey and they do not build hives. Although they don’t feed on wood, they tunnel and burrow inside it. Carpenter bees nest in wooden walls, foundations, fences, decks, patio furniture and even window frames, as well as trees, tree trunks and dry wood.

They are also slightly more aggressive than honey bees. While they do not cause immediate damage, with time they cause serious structural instability. They create perfectly round holes, about half a centimetre in diameter. They also leave a pile of sawdust below fresh holes.

What to do in case of a bees infestation

Do not try to remove the hive yourself! Experienced bee-keepers know how to move the nest without irritating the bees. They use professional clothing equipment which minimises the risk of bee stings. They also know how to behave around bees without them feeling threatened. After the nest is removed, it is moved to a safer location, far from rural areas. The captured hive can also be domesticated.

The honey bees population is on the decline around the world and specialists try their best to preserve them, as they are an integral component of the biodiversity on Earth.

Check also: How to Get Rid of Bees Naturally

Keep in mind that we only aim to provide some useful information about bees in general. We cannot guarantee that the insects you're dealing with corresponds to the same description and are exactly the same.