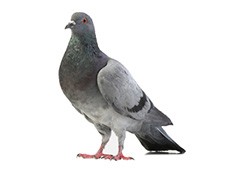 Pigeons and doves are a family of birds, characterised by stout bodies, short necks and mainly seed-based diet. Their distribution is cosmopolitan and members of this family live in every region of the world, except the Arctic, Antarctica and Sahara desert. “Pigeon” is usually used to indicate members of the Feral pigeon species (Columba livia domestica).

Basically there are two things that attract pigeons to your house or garden:

Pigeon excrements are also a vector for various pathogens. They spread nasty diseases such as pseudo-tuberculosis, fifth disease and salmonella. Pigeons are also prone to various diseases, such as twisted neck disease, cankers and tapeworms. Thus the life expectancy of a feral pigeon in the wild is 4 years, compared to 20 years in captivity.

Some of the diseases feral pigeons spread are not to be underestimated. Salmonella bacteria are the pathogens of typhoid fever. Pigeons also spread the West Nile virus, which can cause anything from mild pneumonia to permanent damage to the nervous system, and even fatal brain inflammation.

Read more: Bird mites and the dangers they pose.

The faeces of Feral Pigeons contains acids that cause damage to man-made structures. A single specimen can “produce” up to 10 kg of excrements a week.

Get assistance from qualified pest technicians!

Feral pigeons are gregarious birds and tend to live in flocks. Pigeons who live in urban areas concentrate in down-town regions and act as a nuisance to the general public. Although Feral pigeons have coexisted with humans for centuries, they are very nervous animals and quite easy to scare.

They nest as far as possible from human activity—on highrise rooftops, in abandoned buildings, and on tall building facades. Rock pigeons nest on top of cliffs along the shoreline. It is unlikely to encounter one in a rural area, especially in inland settlements.

As gregarious animals, feral pigeons tend to nest in flocks. Once they settle, they tend to nest at the same place for the rest of their lives. Pigeons are extraordinarily intelligent. Even when removed from the nest, they will return back to it. The distance doesn’t play a role—pigeons have “built-in” compasses in their bodies which provide tremendous help with orientation. No matter how far away from their home they are released, they will still find their way back.

Feral pigeons breed rapidly. They lay two eggs, up to six times a year—depending on the food available. If a local population is decreased, pigeons from other areas flock to take advantage of the abundance of food. Thus, poison often causes population boom rather than decrease.

Feral pigeons feed on berries, seeds, small insects and spiders. On rare occasions, they might eat the eggs of other birds. Feral pigeons who live in rural areas are considered scavengers. Their diet consists of any food they might stumble upon. The list includes chips, breadcrumbs; food disposed of by restaurants and supermarkets, and birdseed distributed by bird-feeders.

What most bird-feeders do not realise is pigeons consume only 10% of their weight a day. This means that a 200 g bird eats 20 g of food a day. Bird-feeding causes pigeons to flock. They perceive the feeder as an abundant food source. They are intelligent enough to remember the face of the feeder and associate it with free food.

What to do in case of a pigeon infestation

There is no easy way to battle pigeons. The most effective way is to ward them off and prevent them from nesting. This is achieved by placing plastic spikes and other obstacles on surfaces where they might land. Sometimes a substance called “fire gel” is used. This gel causes severe irritation to the birds but is otherwise harmless. Poisoning is ill-advised—dead pigeon carcasses pose far more health risks than living birds.

It is also important NOT to feed the birds. Pigeons are social and communicate the location of food. Feeding a single pigeon can quickly result in a flock of over twenty specimens under a week. Eliminating possible food sources is deemed a humane way to keep their population at bay.

To achieve the best results, consider opting for a professional bird control service.

Want professional help with the pigeons?

We only aim to provide some useful facts about birds and pigeons. We don't provide any medical advice.