We may not always notice it on the way to work, but our cities are rich in animal life. Amongst the common urban dwellers is the feral pigeon - a bird that is both loved and condemned by people.

As we moved to urban areas, the pigeon followed for a good reason — living beside us offers a range of amenities such as easy access to food and shelter. And since pigeons are non-migratory birds, that is really all they need all year round.

However, these birds aren’t the flying equivalent of the dream housemate. In today’s article, we will explore pigeon’s nesting habits, life cycle and how to deal with a nest, if you’ve found the bird’s presence to be too fouling and annoying.

Why do pigeons nest on buildings?

Besides food, feral pigeons are also attracted to man-made constructions as their main nesting grounds because of the warmth they provide. We know that the bird is an ancestor of the rock dove, which naturally inhabited mountains and sea cliffs, and to the nesting pigeon, building facades and cliffs aren’t that different. Add to that the fact that there aren’t almost any natural predators and our towns quickly become an appealing place for pigeons to inhabit.

Want to deter birds from your property?

Where do pigeons prefer to nest?

The feral pigeon, also known as the common pigeon, isn’t that picky when choosing where to nest, as long as there are food and water nearby. You can spot them around parks and city buildings, farms, feed mills and agrarian facilities, and a variety of other structures. Pigeons are community birds, so you’ll often see entire flocks sharing a building. Some of the nesting places preferred by pigeons are:

They provide the perfect nesting ground because of the many nooks and crannies great for building a nest in, as well as the minimal disturbance the birds feel. It comes naturally for pigeons to find easy access points.

Roofs often have an easy access to water which pigeons really like. Such sources might be water cisterns or tanks. Roofs also make for a convenient place to nest since there are gutters, chimneys and other available nesting spots.

Since pigeons love to nest and roost on elevated areas, gutters are another favourite of theirs. Perching on top gives them the advantage to quickly spot feeding sites and keep an eye for dangers. Additionally, the shape of gutters also allows for a firm placement of the nesting material. Pigeon debris is one of the most frequent causes of blocked gutters.

They provide a decent shelter against the wind and are “comfortable” enough for pigeons to build their nests on top, behind, or even inside the unit. However, since bird nests are dirty and may have bird mites or other bugs, the units can become a health hazard if spores from the pigeon’s droppings get into the airflow of the ventilation system.

Because they are warm and secluded, chimneys are a good roosting spot for pigeons. Occasionally, however, a bird may fall into the chimney and get stuck for a couple of weeks. In such situations, a human intervention is required in order for the pigeon to escape.

As we already discussed, a good view over the nearby areas has many advantages for the pigeons, so it’s no wonder building ledges are also amongst their favourites when it comes to roosting and nesting.

Do pigeons nest in trees?

Some pigeon species do nest in trees near human establishments. In the UK, we have the wood pigeon which isn’t considered a pest because it nests in trees, close to roads. Their diet is the same as that of the feral pigeon but since they don’t spoil people’s homes, they are effectively excluded from the “flying rat” clique.

How do pigeons construct their nests?

If you’re worried that pigeons are chipping on your building to make their nests, don’t be. Rock pigeons pick up sticks, straws and leaves from the environment around to create their saucer-like nests. When the nest is new, it looks quite flimsy. But since pigeons poop in generous amounts all over the place, the nest becomes sturdier with time. The birds are also known to reuse and build upon their previous nests, so keep that in mind if there’s an abandoned one on your property. 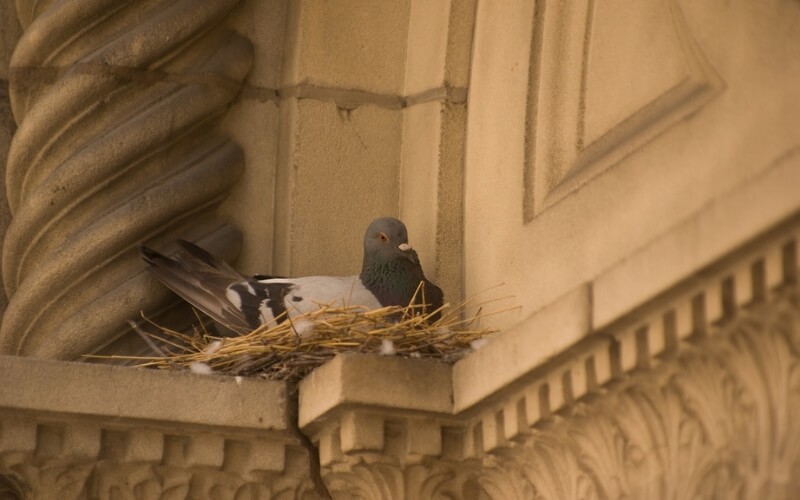 Once they inhabit the nest, the female bird will wait a couple of days before laying the first egg. Usually, a total of two eggs will incubate around 18 days. The newborn pigeons will leave the nest on the 25th to 29th day. The feral pigeon usually needs at least 7 months to reach sexual maturity. Pigeons are monogamous and breed no matter the season. In the UK, the peak reproduction of pigeons is in autumn and spring. Their average life expectancy is 3 to 5 years but others may live up to 15 years, depending on many natural factors.

How to repel nesting pigeons?

In the UK, getting rid of the pigeons involves getting familiar with a few laws regulating the matter. For example, any means of lethal control of pigeons or other wild birds are illegal according to the Wildlife and Countryside Act 1981. This means that your goal should be to deter the birds and prevent them from nesting. There are several tactics you can leverage in order to rid of the nesting pigeons:

Can you move a pigeon’s nest?

Relocating a bird’s nest may seem like the humane thing to do but again, the nests and the eggs, if any, are protected by the Wildlife and Countryside Act from 1981, so moving them is considered an act of offence. Only licensed individuals can move a wild bird’s nest and even then it can happen only if certain conditions are met.

If you are unsure what to do with the pigeons that inhabit your building, make sure to consult with a professional bird controller.

As a commercial service provider we only aim to inform you about pigeon nests according to the professional experience of the pest technicians. However, we cannot guarantee that the above-mentioned advice on how to prevent pigeon nesting, will lead to successful results.