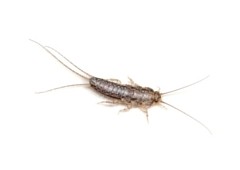 Which is the oldest pest known to Earth? Most people will say “the cockroach”. After all, it was here in the time of the dinosaurs. But there’s a household pest we are used to that is much older than roaches. It is also one of the first animals to colonise land and evolution has changed little from the Devonic period.

They do not carry any known disease from pre-historic times. Yet they have acquired a fine taste for old books, leather clothing, quality wallpapers and other everyday objects we don’t want to see consumed by an out-of-control insect population. We discuss the silverfish, its appearance, habits, diet and its classification as a vermin.

Although sometimes mistaken for dangerous centipedes, Silverfish (Lepisma saccharina) are actually insects. They have small, tear-shaped, wingless bodies that reach up to 30mm in length. Their name derives from their scaled skin of the body and silver-blue colour.

Silverfish have long curved antennae and three distinct bristles on their rear. They move in a jingling motion resembling that of a fish. Their appearance doesn’t change much with time. The only difference is their colour—Silverfish nymphs are usually creamy white in colour.

Baby silverfish look like miniature versions of their mature relatives. They are soft and white in appearance, so you might not be able to tell the difference between an adult and a baby. The most useful clues that can help you determine whether they're babies or not are the length of the antennae.

Silverfish are among the oldest species of animals on Planet Earth. They, alongside with bristlebacks and firebrats, make up the Apterygota subclass. Silverfish are closely related to the Rhyniognatha, the world’s oldest known insect.

It has been suspected silverfish are among the first insects to conquer the land. The earliest fossil records of silverfish come from Tertiary and Cretaceous ambers—more than 140 million years old.

Silverish feed on polysaccharides. Books, leather, coffee, carpet, sugar, paper, photos, cosmetics and starches are all included in their diet. They are attracted by damp areas and clothing. Silverfish thrive in kitchens, garages, attics, basements and inside box containers.

They are nocturnal animals and rarely wander during the daytime. They also move in a rapid, quick manner, making them hard for homeowners to spot. Silverfish reproduction is slow—the female can lay no more than 60 eggs at once, and on average lays 100 eggs per lifetime.

What they lack in reproductive efficiency, they make up in longevity. Silverfish live up to 5 years and can survive for several weeks without water, and for a whole year without food. They also cannibalise fallen or injured insects.

They look creepy, don’t they? Worry not! Silverfish do not spread any known diseases and are not venomous to humans. They are not known to bite humans and there is no proof they can—their mandibles can hardly penetrate anything thicker than a paper page.

Unfortunately, a silverfish infestation can have an indirect effect on your health. They are prey to various dangerous pests such as centipedes, spiders and cockroaches which can harm humans or spread diseases.

Households all over the UK have reported damage caused by silverfish to various household objects—leather furniture, books, important documents and family memorabilia. They also feed on wallpapers and wallpaper glue and a serious infestation can easily strip your walls off its coverings.

They feed on plants and sugary foods. They have developed a keen love for cereal and have been found inside sealed packages.

Silverfish do not require specific conditions to infest your property. Although they prefer damp environments, they can still live in dry, well-lit areas, especially if there is an abundance of food. They are a cosmopolitan species—they live on all continents except Antarctica and have even spread to Pacific islands.

High humidity is usually a contributing factor to infestation. Silverfish thrive in areas with 84% air humidity and 30ºC. Another contributing factor is the abundant food sources. Those include but are not limited to cereals, sugary foods, old books, wallpapers, glue, and leather clothing. They also feed on various plants and on rotting leaves.

Read more: What attracts silverfish to your home?

Read more: How to get rid of silverfish?

What to do in case of a silverfish infestation

A popular Do-It-Yourself method of silverfish control involves the use of cinnamon. It is a natural repellent to those creatures and they will avoid its odour at all costs. While this method is ineffective at eradicating them, some cinnamon inside your cupboards may save your spices and sweets from destruction. However, this will not guarantee a silverfish-free property as cinnamon cannot kill them.

For severe infestations, you should rely on the services of an expert who can spray the hiding places of the silverfish and ensure their elimination.

We only aim to provide some useful facts about silverfish and how to identify them easily. Anyway ,we don't provide any medical advice.