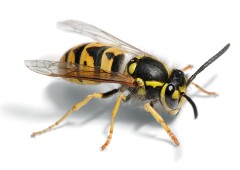 The average person gets stung by an insect no more than 5 times in his/her life. Still, stings are the main reason we fear wasps and try to swat them whenever we see one. The pain of a wasp sting, however, is usually short and fades in a couple of hours but a small percentage of the victims suffer allergic reactions. In fact, our bodies can react in different ways, ranging from a mild skin rash to severe swelling, and even anaphylactic shock. In this article, we will explore all about wasp stings (as well as bee and hornet stings for comparison), the ways our bodies react to the wasp venom and what to do if you’ve been stung.

Why do wasps sting?

Wasps are most likely to sting people towards the end of the summer season. This is mainly because of the way their colonies develop and function at that period. They begin their preparation for winter hibernation, so the wasp nest slowly begins to die off and stops producing worker wasps. The remaining workers feel disoriented by the change and no longer have the abundance of food which they had during the summertime. All of this forces them to scout for nutrients.

Wasps’ diet is quite diverse which often puts them in people’s way. Strong scents of varying origin attract the insects and open windows invite them into our homes. A hungry wasp will even be happy to visit the rubbish bin.

Hunger is one thing but when they see a human being frantically flapping at them, that’s when they get hostile. At this point, not only are they endangered to starve but they feel the imminent threat of your presence - that’s enough to make anyone easily irritable.

Another reason why wasp sting people is because of their protective nature towards their nests. If you happen to be within reach, they’ll surely try to defend their territory.

Read everything about wasps >

How many times can a wasp sting?

Unlike bees who are easily harmed when stinging, wasps can sting you multiple times without any negative consequences for them apart from the increased risk of being swatted. They do however run out of venom in the process, so there’s only so much they can inject into their victims. They also have the ability to allocate the amount of venom injected, so they’ll usually not "waste" venom on smaller targets but with humans, they will inject the entire amount since they perceive us as a greater threat.

What to do if a wasp stings you

Unlike bees, wasps will not leave their stinger inside your skin, so you shouldn’t seek to remove it.

There are many home remedies that are believed to be helpful with wasp stings, vinegar is just a single example. But the fact is, none of these do-it-yourself solutions has been scientifically proven to provide long-lasting relief.

Placing an ice pack on the sting will alleviate your pain and decrease the swelling. You should also avoid scratching the area as it may increase both itching and swelling, and read more about wasp sting relieving methods.

Want to get rid of wasp infestation!

A normal reaction to wasp stings, which is what most people experience, includes local pain, redness, itchiness and some swelling in the area you’ve been stung. Those effects will pass on their own within hours and up to a few days, so there’s no reason to worry or contact a medical professional.

A small percentage of people, however, may develop hypersensitivity after being stung. This can happen after a single sting or as a result of a series of stings where the body reacted normally. This sensitisation will promote a more severe reaction next time that person gets stung and may even present itself as an anaphylactic shock.

Localised allergic reactions appear at and near the spot where you’ve been stung. They advance slower than general reactions and can take up to several hours to develop. Localised reactions vary in their size and can affect a small portion of the skin or an entire limb. The pain may last for days but such reactions aren’t dangerous unless they affect the airway.

A general reaction will impact areas of the body besides that of the bite; the severity of the reaction and its symptoms varies with people. It all begins with intense itching and skin redness, followed by swelling and sometimes blistering. People with stronger reactions start to feel really ill and experience shortness of breath, some may even lose consciousness. The symptoms usually appear within minutes of a sting. It’s advisable to seek professional medical help to shorten the recovery period and soothe the negative effects of wasp stings.

The venom contained in wasp stings may cause anaphylaxis in a minority of susceptible people. This is essentially a severe allergic reaction that affects multiple body systems at the same time and can even cause death. A person can experience it within minutes or hours of a sting, so if you’ve been stung, make sure to observe yourself closely for the next 24 hours.

Some of the symptoms include:

Anaphylactic shock is a medical emergency, so you should seek help if you develop several of the abovementioned symptoms.

How to avoid wasp stings?

The wasp venom accumulates in the human blood. This means that your body’s reaction will intensify when increasing the amount of injected venom - it can even become life-threatening if multiple wasps sting you repeatedly. And although the chances of that happening might be slim, you should know that the venom contains a pheromone that attracts the attention of other wasps nearby. If you’ve been stung near a wasps nest, soon enough you could be facing an entire buzzing army. Unlike bees, wasps can sting you many times without being affected by that at all.
The wasp venom is different from the bee’s and is alkali. Because of this, people allergic to wasp stings are rarely allergic to bee stings and vice versa. However, a single sting can unlock an allergic reaction in a person who wasn’t allergic before. On the contrary, allergy to bee venom is developed upon frequent stings by the insect.
Wasp stings are painful for a couple of hours but itching and swelling may remain up until a week.

Honey bees aren’t as aggressive as wasps, they only attack if their hive is being threatened. Another rather relieving difference between both insects is that some bee species can sting you only once. This is because their stingers are barbed so they will get stuck in your skin resulting in the bee’s death. However, queen bees, some species of solitary bees, and bumblebees have stingers that are much smoother, allowing them to sting their target multiple times without hurting them. But since most bee species do have barbed stingers, your first job, should you get stung, would be to remove the stinger as quickly as possible in order to reduce the amount of injected venom.

Now, hornet stings cause a totally different in strength and duration pain because their venom contains large amounts of acetylcholine. This makes the stings extremely painful for humans. The venom of some hornet species is so powerful, it can actually kill a person. Luckily, said species are not found in UK and hornets are overall a rarity here, so we’re safe. Similarly to wasps, hornets can sting multiple times without experiencing any harm themselves and people who are allergic to wasps will be allergic to hornet’s venom as well.

Difference between bees, hornets and wasps.

Difference between wasps and hoverflies.

Wasp stings on dogs and cats

Unfortunately, there’s little you can do to keep your pet safe from stinging insects. Cats and dogs are curious and playful creatures, and will not feel the protective fear we humans have when facing an angry wasp. The situation can quickly get pretty ugly - if the animal tries to eat the insect, it can result in it getting stung in the mouth or neck area. Similar to humans, animals can be allergic to wasp stings and can suffer severe reactions. It’s key to observe your pet for at least 24 hours after the incident to ensure everything is okay and contact a vet straight away if you notice the situation is getting worse.
To protect your pets and your family from a wasp attack, you should have the problem taken care of by local wasp control expert.

We only provide valuable information regarding wasp stings and the possible allergic reactions. Anyway, we are commercial service provider and cannot give you a medical advice.