Types of Squirrels in the UK

There are millions of squirrels in the UK, however, we cannot point out the actual number. There are four distinctive types of squirrels that can be found in the country - red, brunette, grey and black.

The red and grey ones are the most common. There are around 160 000 red and 2.5 million grey squirrels in the UK.

In this article, we cover the most common features of the red and grey squirrels such as appearance, habitat, behaviour and diet. If you’re curious to learn more about these species, keep reading. 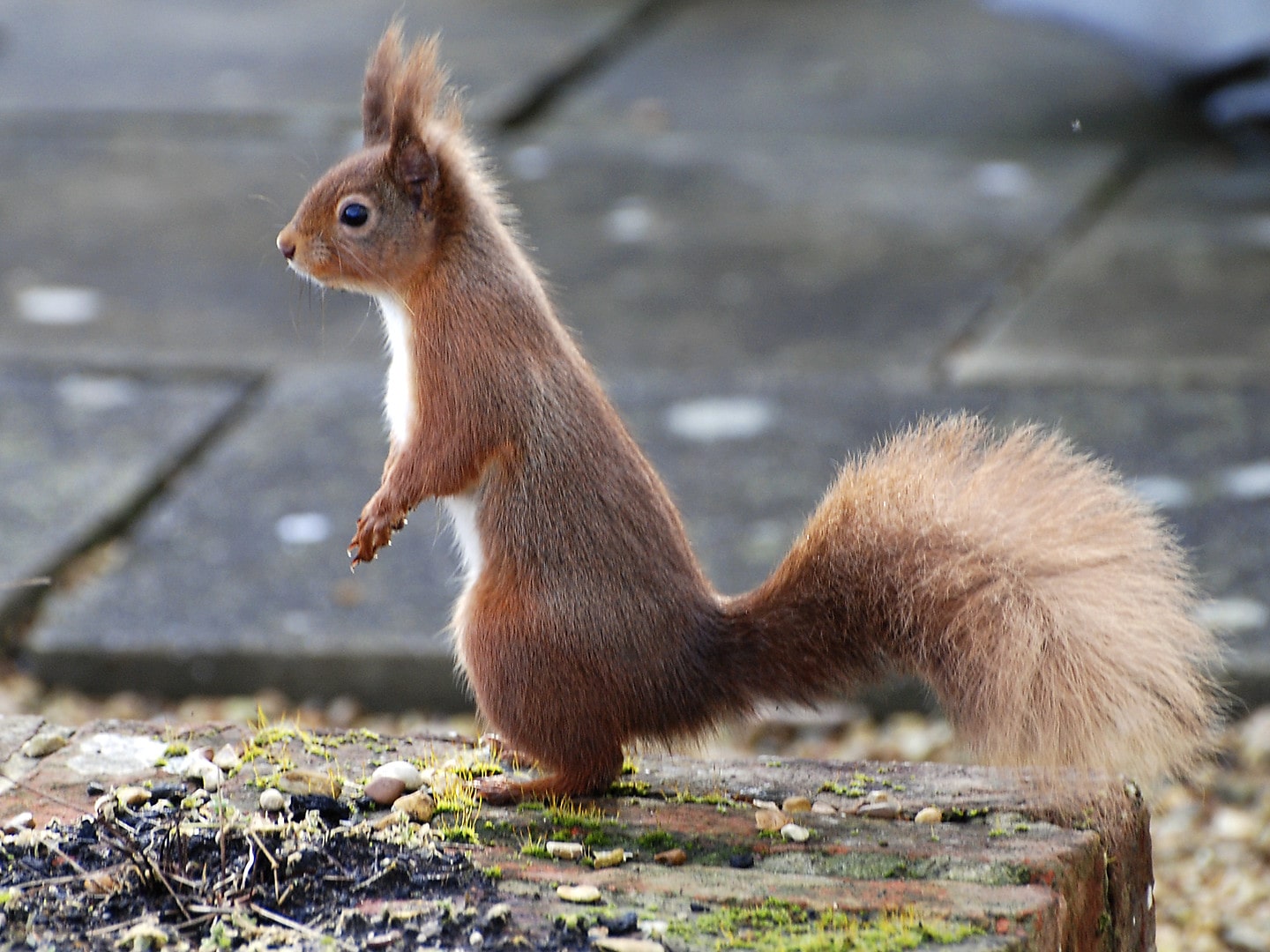 Red squirrels are the first and foremost species in the UK. They are tree lovers and herbivorous rodents.

Unfortunately, the number of red squirrels decreased dramatically in recent years due to the fact that humans introduced the grey squirrel from North America. Later, we will discuss the reason for their extinction.

Together, the body and the head of the red squirrel are approximately 20-24cm long. The tail only is almost as long as the body with its 15-20cm. Red squirrels weigh 250 to 350g. There is no difference between males and females. However, red squirrels are a bit smaller than the grey squirrels

The fluffy and long tail is the tool that helps them keep balancing and jumping from one to another tree. They also use their tails to keep them warm in winter and while they sleep. Red squirrels have white to dark tails.

The red rodents have a variety of coat colours depending on their location or the season. Usually, they range from red to black where red coats prevail in the UK. The underside is white in colour. Red squirrel shed coats twice per year. During hot summer times, their coat is thinner and switches to darker and thicker during winter.

European red squirrels can be recognised and distinguished from the American ones, as the European have redder and lighter coats and are smaller in size.

Red squirrels reproduce twice a year. Once in late winter which continues until February and during summertime between June and July. During mating season, males can sense the females’ odour and will follow them for up to one hour before mating.

One female can have two litters with approximately three young (called kits) in a litter. Usually, females are the ones that nurse deaf and blind babies. Juniors weigh between 10 to 15g. They leave the nest around 40 days after birth but are still not independent until their 10th week.

Red squirrels that overcome the cruel weather conditions during winter have an average lifespan of 3 years. The longest they live is 10 years, only if they have the appropriate conditions such as the availability of tree seeds.

Red squirrels in Europe can be found in broad-leaved woods. There they search for trees and brush that offer a great source of food. In the UK, those woodlands are less preferable because grey squirrels are well-spread there. Anyway, there are still several places you can spot a red squirrel on the island. For example, Aira Force or the Isle of Wight are woodlands where red squirrel populations thrive perfectly. The Isle of Wight offers great crops of hazelnuts and in Aira Force, special volunteering rangers take care of the red squirrels.

Red squirrels usually feed on tree seeds. They outcrop cones where they search for seeds. Also, they love eating nuts such as hazelnuts, chestnuts and beech. Except for seeds and nuts, red squirrels love eating insects, mushrooms, fruit like berries. Sometimes they can eat even young birds, dead mice or rabbits. When fall begins, red squirrels will store pine cones in the ground.

Red squirrels prefer to be in private. They are shy and refuse to share food with others.

The squirrels spend most of their active time seeking food and eating. Red squirrels are more active in the mornings and evenings. The rest of the day they spend resting in their nest, where they stay away from heat and the sight of predators. During winter days if the weather is not that severe, this rest is much shorter or absent, though bad weather makes them stay in the nest for days. 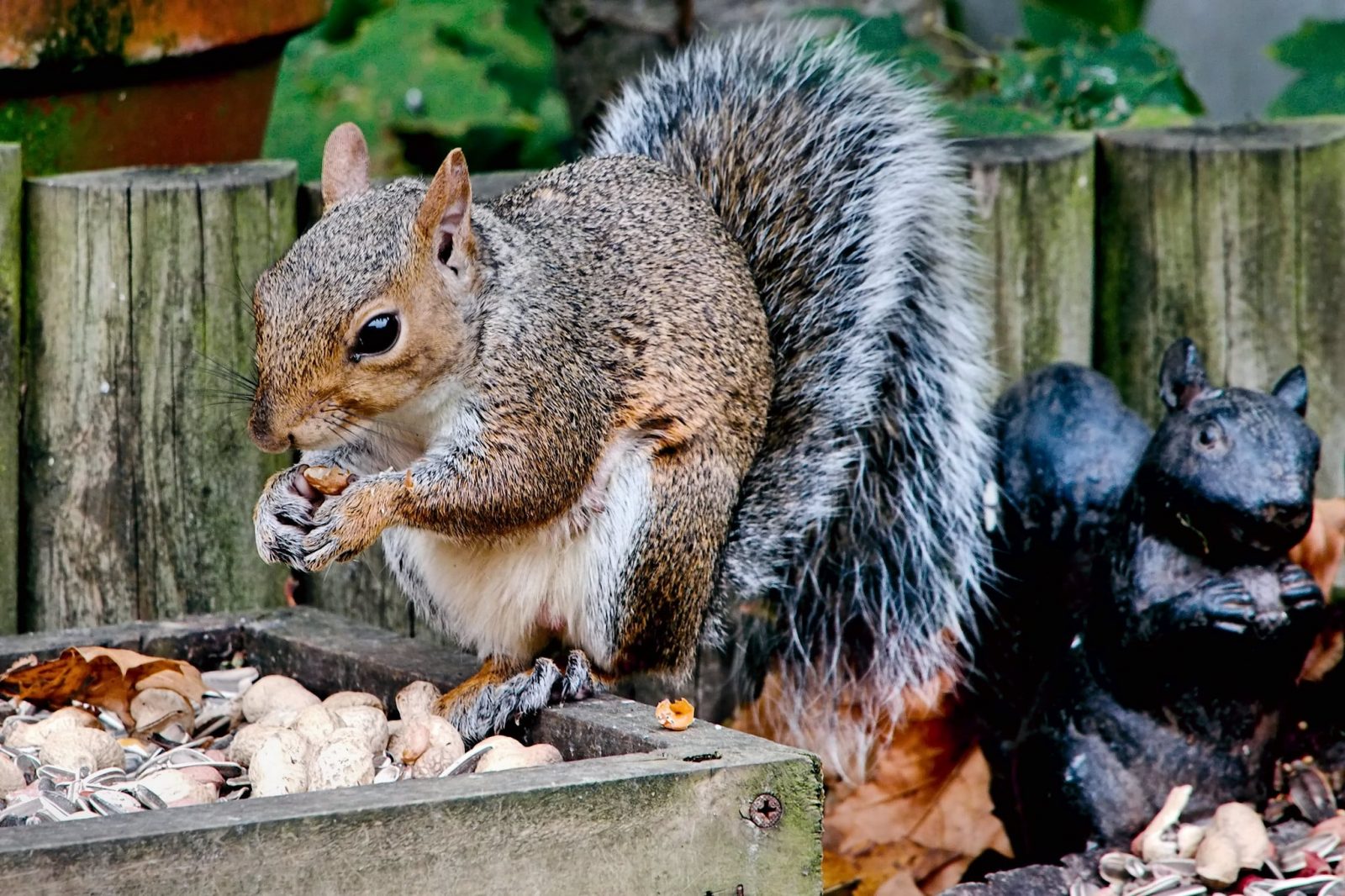 Grey squirrels are tree squirrels, native to North America, where they are essential and ecological forest carers. In the early 20th century (1870), grey squirrels were introduced in the UK as a modern addition to properties. However, they reproduced quickly and soon they settled in Wales and certain parts of Scotland. Nowadays, grey squirrels outnumber the population of red squirrels on Britain’s mainland.

Both, combined, the body and head are around 20 to 23cm long. The tail is fluffy and can reach up to 25cm. Grey squirrels are heavier than red squirrels and weigh from 400 to 650g. Males and females squirrels are not differentiated in size or colour. Most of the squirrels are grey but can be found in brownish species as well. Similar to the red squirrel, the grey ones have a white underside. Rarely, where predators are not common, white or black representatives of the species can be discovered.

Grey squirrels are mating two times per year. It is common for young and inexperienced females to have only one brood and it’s usually during spring. On the other hand, the elder females can have a second offspring in the summer. Their reproductive periods are once in December to February and in May to June. The baby grey squirrels are blind and without fur. One litter contains three to four juveniles. The nursing period is approximately 10 weeks, however, the young can feed on solid food after 8 weeks. Grey squirrels start breeding at 12 months old. Usually, males continue reproducing up to 3 years and females stop mating after the fifth year. Grey squirrels are expected to live approximately six years on average. Anyway, there are cases of grey squirrels that survived 12 years in the wild and 20 in captivity.

Grey squirrels inhabit big and bushy woodlands. They prefer forested areas where they can find oaks or hickories that provide them with a complete source of food. Grey squirrels prefer hardwood forests to coniferous ones because they are full of forage. Today, grey squirrels are much closer to urban life and you can find them in parks, gardens, agricultural lands, and the countryside.

Unlike red squirrels that can be found only in particular places across the UK, grey squirrels are one of the most common to be seen. Go to the nearest park and you will see them jumping from one tree to another, collecting nuts and seeds.

Grey squirrels seek and collect seeds such as walnuts, chestnuts, hazelnuts, oak, and more. If these provisions are not available, grey squirrels will search for shoots, pine cones, flowers, food left in bird feeders, bird eggs, and even young birds. In the UK this squirrel species tear the tree barks so that they can get to the tree’s cambium. Also, grey squirrels take a serious amount of the birds’ food from feeders which don’t allow birds to access the supplements. Sometimes grey squirrels raid backyards where they search for garden crops, corn, berries, and even tomatoes.

Learn more about what else do squirrels eat

Grey squirrels are known for collecting and hiding food in different hideouts. Some of the caches are temporary. For example, they can hide food somewhere near the source and in a few hours to move it to more protected hiding. On the other hand, the permanent hiding places are used to gather food that will be retrieved after months. They position their hind paws in a way that the claws are pointing opposite and can clutch the tree bark.

Grey squirrels are intelligent mammals and can mislead the predators when they feel their food is threatened. What they do is pretend to be hiding a certain food, if the enemy is watching them. Grey squirrels can descend from a tree with their head first.

Grey squirrels build nests, called dreys. They are built in the tree branches from leaves, barks, and grass. Males and females can share one nest but only during the reproductive period or cold winter days so that they can warm each other.

In the UK many people struggle with squirrels in the attics. Grey squirrels don’t use attics as a nest but sometimes they can use them as shelter or a place to search for food. Usually, squirrels make annoying noises, gnaw at electrical cables, insulation or walls. For that reason, you should call for professional squirrel control, and the pros will get rid of the squirrel in a humane manner.

Why Are Red Squirrels Endangered

As we’ve already mentioned above, grey squirrels are threatening the red squirrels’ population. The circumstances are due to the following reasons:

Due to the above-mentioned problems that red squirrels face, their population has reduced to approximately 160 000. Not only that but unlike grey squirrels which you can spot almost anywhere from parks and woodlands to your garden, red squirrels are limited only to certain parts of the UK. Usually, such places are more wild, secluded and remote.

The only way red squirrels can be saved from extinction in the UK (which can occur in 10 years), is by applying special conservation measurements. So, in order to keep red squirrels safe, they should be separated from the grey ones.

In the UK, red squirrels are protected by special legislation under the Wildlife and Conservation Act 1981.

Not only that but the population of red squirrels can increase very soon as a new plan is prepared to limit the number of grey squirrels.

Is It Legal to Shoot Grey Squirrels

Grey squirrels have limited legal protection and can be controlled all year round by a variety of methods including shooting, trapping, drey poking, poisoning, etc. You are not allowed to introduce and release grey squirrels into the wild. To learn more about your rights check this article from the British Association for Shooting and Conservation.

There are only two most common squirrel species in the UK - the red squirrel and the grey squirrels. Each of them has specific features that tell them apart.

Red squirrels are native in the UK, whereas grey squirrels were introduced from North America and are the main reason why red squirrels might become extinct any soon. Also, grey squirrels can become a pest if they enter your loft or attic so controlling them can save you from property damages and electricity problems.

You have a grey squirrel in the loft?

Bear in mind that we only aim to provide some useful information about the types of squirrels in the UK, what are the possible property damages they can cause. We cannot guarantee that you will experience the above-mentioned concerns.