The term “woodworm” relates to a family of wood-boring beetles whose larvae feed on timber. When people say “woodworm”, they usually refer to the beetles’ larval form. Adult beetles are about 60 mm long and have elytron—a pair of hardened forewings.

Species of Woodboring Beetles in the UK 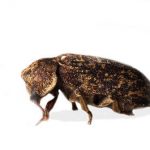 The Death Watch Beetle is native to Britain and prefers hard timbers such as oak, chestnut and beech. The wood must be partially infected by fungi for a beetle to lay eggs on it. Its body is oval in shape and dark grey in colour. On average, an adult beetle is 7 mm long. The larva is creamy-white, with a yellow head and black mandibles. It is also the largest of all woodworm—up to 11 mm long. This woodborer rarely uses its wings and almost never flies. 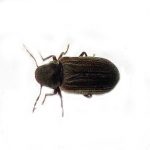 The adult beetle reaches only 4 mm in length. They also tend to fly, especially in warm climates and in sunny weather. They spend 3-5 years in larval form. Unlike most woodboring beetles, the Common Furniture Beetle attacks only well-seasoned lumber with the bark removed. As the name suggests, the greyish-white larvae infest furniture, structural timbering, wooden panelling and flooring. 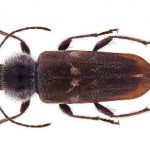 This is the only woodboring beetle that infests the same wood it emerged from. It is not native to Britain and came from Europe. The adult of this beetle is 8-25 mm long and black or brown in colour. The body is slender and long, with distinct antennae, curved at the end. The larvae can tunnel for up to 11 years before emerging. Like the Common Furniture Beetle, the Old-House Borer flies freely in warm, sunny weather.

It infests hardwoods such as oak, walnut, beech, ash and elm. The adults have red to light brown bodies, oval in shape. They reach 4-7 mm in length. Although they have a relatively short lifespan (about a year), they cause so much damage often infested surfaces crumble to the touch—hence their name.

Woodworms go through 4 stages in their life. First, an adult woodboring beetle lays eggs on damp wood. When the eggs hatch, a larva emerges. The larva burrows in the wood, where it remains for several years. It tunnels and feeds on timber. The average woodboring beetle remains in the larval stage for 4 years.

After that, the larva returns close to the surface of the wood and turns into a pupa, from which the adult beetle emerges. The adult furniture beetles, the final stage of a woodworm’s life cycle, fly toward light sources such as windows and UV lights as soon as they chew their way through the wood.

How to spot an infestation

There are several signs of a woodworm infestation:

Learn how to get rid of the woodworm infestation

What to do in case of a woodworm infestation

Only an experienced pest technician is able to treat woodworm infestation. The good news is that once exterminated, wood beetle larvae would have a hard time infesting the treated timber for years. Although the procedure is difficult, it is fairly simple. A special paste is injected in the exit holes, which prevents larvae from escaping and causes them to suffocate. If possible, woodworm close to the surface can be removed.

Want a professional to inspect your home?

Keep in mind that we only aim to provide some useful information about woodworms in general. We cannot guarantee that the bugs you're dealing with corresponds to the same description and are exactly the same.