What Do Foxes Eat? 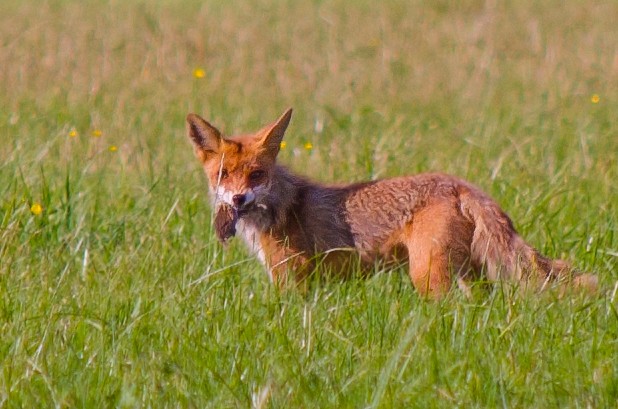 Intelligent, somewhat sly and infinitely adaptable, foxes are the United Kingdom's best known and most successful predator. Although native to Britain's woodlands, foxes have moved into urban areas. A 2017 study estimated that the UK’s urban fox population may be as high as 150,000.

The presence of foxes in our towns and cities gives rise to strong feelings on both sides of a debate. Conservationists argue that as we reduce the natural habitat of our native wildlife we should celebrate their ability to find a niche in our urban environments. Others see foxes as a pest and a menace whether found in the country or the city. Some fear the introduction of disease or even the loss of their own pets to a sly and opportunistic scavenger. There are valid points on all sides of the debate. Understanding a little bit more about fox behaviour and how they interact with us makes it easier to come to a decision about when they should be allowed to coexist with us and when it's reasonable to take steps to keep foxes at bay.

What do foxes like to eat? Well, most things as it happens. You might think of foxes as carnivores and hunters. In fact, foxes are omnivores and as many scavengers as hunters. In the wild, the foxes diet consists of around 95% meat, mostly rodents, birds and small mammals which are obtained both by hunting and scavenging. Woodland and countryside foxes also eat insects and, when it's in season, fruit. Urban foxes also eat meat, but studies suggest they eat far more insects and more fruit than their country cousins. Around 18% of the urban fox diet is thought to consist of human household leftovers, often collected overnight from poorly secured bins. Country or city, foxes are actually somewhat lazy, if they can scavenge food rather than hunt for it they will, as this takes less energy.

It's possible but highly unlikely. A young kitten left in the garden unsupervised might be vulnerable to a fox attack but a mother cat will defend her young ferociously. Foxes and healthy adult cats are evenly matched in size, and cats have strong claws and a healthy instinct for self-defence. Foxes prefer smaller and easier prey. A vixen might get into a fight with a cat if she has cubs and the cat gets too close to her den, but in general, foxes will avoid anything as well equipped to fight back as a cat.

Most dogs are larger than foxes, so a fox won't see them as potential prey. In theory, a fox could take a teacup poodle or similar miniature breed but in practice, most owners of tiny dogs don't leave them unattended where a fox could take them.

Yes, if given the opportunity. Squirrels are certainly small enough for a fox to hunt. The fox would certainly need to catch the squirrel on the ground and some distance from a tall tree. Both species move quickly when they need to and while both are good climbers, squirrels find safely in higher and weaker branches that won't support a fox.

Yes, definitely. Rodents are among the list of foxes' most natural prey and unlike squirrels, rabbits can't climb trees to get to safety. Foxes will also take pet rabbits or guinea pigs from the garden if their hutch isn't well secured.

Yes, especially chickens that can't fly safely. A badly secured coop of chickens is the equivalent of a fast-food joint to the average fox. The fox's tendency to break into a hen house and kill far more than they can eat in a single meal has earned foxes a reputation for cruelty. This is a little unfair as foxes don't kill for fun. Part of their natural behaviour when faced with an excess of prey is to kill what they can, eat until they're full, then bury the rest as a cache to return to at a later time. The farmer who enters the henhouse and finds a large number of dead birds has simply arrived before the fox has had a chance to carry this behaviour through to its natural conclusion.

Foxes like fruit and will eat most seasonal fruit, they seem to be especially fond of apples. While foxes naturally have a high meat, high protein diet they probably need the vitamins and minerals found in fruit too.

They can of course, but they shouldn't. There are chemicals in chocolate that can be highly toxic to foxes and all canids. That's not to say that the melted chocolate left on a wrapper in the bin or dropped in the park will be sufficient to kill a fox, and as with dogs, not every individual has a strong adverse reaction to chocolate. On the principle of better safe than sorry chocolate should be kept well away from any member of the canine family.

What Do Foxes Drink?

Foxes drink water, they'll drink from rivers, ponds, and puddles or, if you leave one outside and the fox is feeling bold it might drink from your dog or cat's water bowl. Foxes will also drink milk if it's there, but as with dogs and cats their digestive system isn't really equipped to digest milk and it isn't good for them.

Learn more about: Signs of Foxes in Your Garden

Why You Should Not Feed Foxes

Some people simply love to see wildlife in the garden and it can't be denied that fox cubs are cute and that feeding them will encourage them to stay in place so you can watch them. For a number of reasons, it's a really bad idea to feed foxes.

It's unnecessary - Foxes are highly efficient scavengers, hunters and survivors. Even in urban environments, they'll find enough food for themselves.

You might cause the foxes to reduce their territory - A fox will naturally range as widely as it needs to, to collect sufficient food. If you're supplying all their needs a fox won't bother to defend a large territory and other foxes will move in. Then if you go away, or stop feeding the foxes in your garden they'll have to fight hard to gain access to a large enough area to support themselves.

Foxes will bury excess food - As discussed above regarding chickens, this is part of their natural behaviour. If you provide more food than the fox needs, some of it might end up buried in your flower beds, or worse yet in your neighbours' flower beds.

You could encourage them to become bolder around humans - Urban foxes tend to fear and avoid humans, they're around but rarely seen and don't cause a problem. When foxes start to see humans as a food source, they become more visible and your 'anti-fox' neighbour may take steps to eradicate them.

Foxes can carry disease - All of the diseases domestic dogs are prone to can be caught or transmitted by foxes, these include parvovirus, distemper and sarcoptic mange, all of which can be fatal. Foxes can also carry and transmit intestinal worms, including Toxocara canis the intestinal worm which, very rarely, causes toxocariasis in children.

As the wild habitats in which foxes live come under increasing threat, it's no surprise that these opportunistic animals have made their homes in our towns and cities. And there's certainly room for foxes and humans to co-exist. You may welcome the occasional visit from a fox to your garden and if it's doing no harm, there's no reason why you shouldn't enjoy observing them.

There are times however when foxes can become a pest. Often simple human steps like fox-proofing pet cages and rubbish bins are sufficient to encourage a fox to move elsewhere. If measures you can take yourself fail and you need some professional help with a fox problem Fantastic Pest Control offers a fox control service. This could involve taking stronger measures to deter foxes from entering your grounds, advice on discouraging them or removal of problem animals. For more information or to discuss your options, feel free to get in touch using our 24/7 phone line or online booking options.

Spotted foxes in your garden?

Note that we only aim to provide some useful information about red foxes diet.