Signs of foxes in your garden 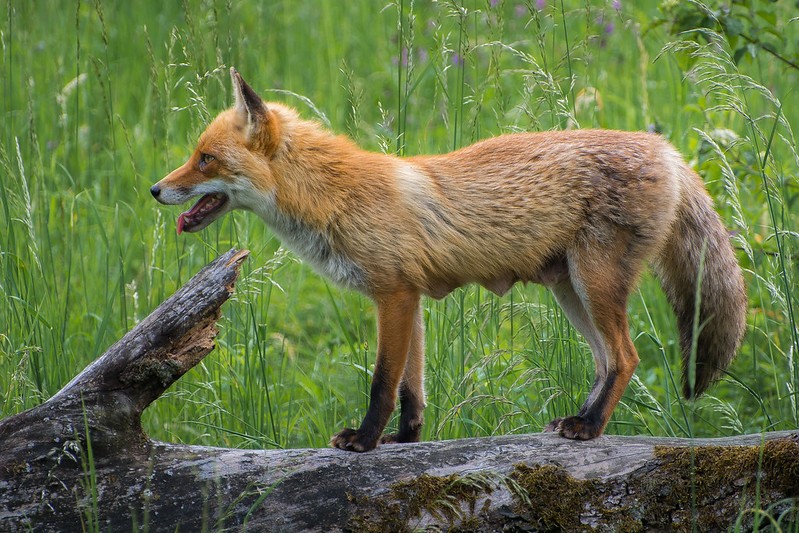 How high can a fox jump? Foxes can jump over 1m fences, so you should make yours higher. If you do not take any actions, seeing a fox during the day may become a regular sight for you.

Foxes have been a problem for people living in the countryside because they live closer to the animals’ natural habitat. Even if the foxes are merely passing through your property, they could still cause some damage or chaos, like knocking down garbage bins. But if you’re taking care of poultry or rabbits, for example, you can expect to have them regularly on the premises trying to get to the animals so they can eat them.

In recent years, foxes have become more confident and used to the presence of humans and have begun terrorising people living in larger cities as well.

Most common signs of foxes in your garden

Even though on many occasions, foxes can trespass without leaving any signs, the reality is that this only happens if a single fox has accidentally passed through your property. If your garden is regularly visited by foxes, there will certainly be some signs left behind.

There’s no definitive sign of the animals’ presence as seeing a fox on your premises, but we’ve prepared a list of some tell-tale signs of foxes in your garden:

At first, you may not be sure what the droppings you see are because their size is similar to the ones of a medium-sized dog. But if you do not have a dog or your dog isn’t the right size and you’re confused, here are a few differences to help you distinguish between them:

Fox droppings in your garden are smellier and often have fur, feathers, bones or seeds, in them due to the fox’s diet, which is vastly different from that of your dog’s.

Fox noises at night are one of the most torturing signs of their presence. Foxes can produce up to 28 different noises. Although they spend most of the time being silent, when their mating season comes, it gets unbearable to listen to them. During that time, two sounds of foxes mating can be heard -  the males’ barking call and the female vixen’s scream.

Furthermore, if the foxes give birth to their cubs near or under your house, you will surely spend your nights listening to the cubs screaming and whickering at each other.

If the foxes feel threatened or are attacked, they may produce some noises as well.

Spotted a fox in your garden?

Book now a pest control technician and protect your home!

Foxes digging up the lawn can result in trampled, torn up plants or ripped up flower beds and vegetables. Even though they wouldn’t want to eat the vegetables, if you’ve used fish or blood containing fertiliser, they will dig them up in search of the meat.

Other reasons foxes dig holes in your garden are to look for worms or if they sense a buried animal - either a pet or a vermin. And another reason is that they dig holes to hide the food they’ve caught.

Fox holes in your garden look a bit like those made by moles but they are not even and the soil isn’t as soft.

If there’s a fox den on your property, you may not even notice it for some time, although that may explain the regular presence of foxes in your garden. However, foxes make their dens under wooden constructions, which can be your house, shed, etc.

If you haven’t spotted a fox den in your garden, you will likely find out about it in late April or May. That’s when the young cubs are old enough to start going outside. Well, if the den is under your house, you’ll surely hear their noises much earlier than April.

Sadly, this is also a clear sign of a fox’s presence in your garden. If the fox is living near or under a construction on your property or happened to catch its prey in your garden, you’re very likely to often spot prey remains.

Such can be bird feathers scattered around, squirrels’ tails or fur, even shrews’ remains. Also, as we said, they feed on rats, so you may see their remains, as well.

Read more: How to dispose of a dead animal

Although these cannot be seen all year round, you can see them in the mud or snow. You will also find it hard to determine whether the paw prints are from a fox or a dog. We can tell you a few differences which may help you. One such is the order of the paws; foxes’ traces are in a straighter line than a dog’s. Also, those of a fox are often narrower than those of a dog’s. Of course, the trace pattern and paw print sizes will vary based on the size and species of the animal but these two differences can still be helpful.

Read: How to get rid of foxes in your garden?

What attracts foxes to your garden? Like every wildlife and vermin that come onto your property, foxes too, are attracted to it because of the presence of food and water. But what do foxes eat that can be found in your garden? Well, a wide range of things actually. Some of the food they are likely to eat on your premises is dog or cat food, deceased wildlife, chickens or other poultry if you have any or stuff in your garbage bins. Also, if your garden has bird feeders, a pond or a fountain where birds gather often, then foxes are attracted to the birds and the water as well.

If you often find your garbage bins in a disarray, that can likely be a sign of foxes rummaging around in them at night in search of food.

Furthermore, if you have orchards, foxes may also be coming to feed on fallen fruit. Some people even prefer to attract foxes to their gardens because they may also catch and feed on pigeons and rats, which are a bigger nuisance to some households.

If you fertilise your vegetable garden or plants with fertilisers that contain blood, fish or bonemeal, you may want to switch to plant-based ones. The scent of meat and blood can also attract foxes to your garden.

Foxes are a vastly adaptable species and can make any city-dwelling into their home. So, what can you do about foxes in your garden? Some people do not see foxes as a nuisance and actually leave food out for them. But if you’re one of those people who find their presence inconvenient or troublesome, you will have to take action. The more they get used to coming on your property and are undisturbed, the more confident they will become and the closer to your house they will get.

Book fox control service and a professional who will take care of the wild animal if you’re being tortured by its presence and actions, or noises. There are several rules and guidelines about dealing with foxes in urban areas, which every fox control specialist must follow. Such include humane shooting outside of an urban area and not releasing the wild animal in another area of the city.

Do you have a fox in your garden?

We provide helpful information according to the expertise and knowledge of the pest technicians. However, we don't offer any medical advice.