Red Foxes - All You Need To Know

Red foxes are the most popular fox species in the UK. In this article, we cover the main questions regarding red foxes and their habitat and behaviour. 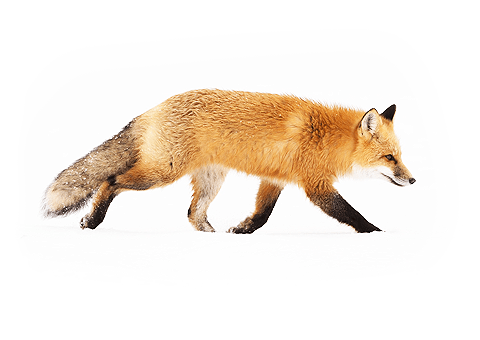 Red foxes have short limbs and elongated bodies but they are the largest species of the Vulpes genus. Their fur is red-brownish, some might say it looks more orange than red. They also have white on their stomach, jaw and neck, paws and tails.

Their canine teeth are relatively long. Also, their tails are longer than half of their bodies' length.

The females' skulls are smaller than the males'.

On average, the size of an adult red fox are:

The weight of an adult fox ranges from 2.2–14 kg, with the females being lighter than the males.

Where Do Red Foxes Live?

If you’ve seen foxes on your property, you must have asked yourself the question “Where do red foxes live?” Red foxes’ habitat is diverse. They are present in several continents and because they are very adaptable, can live equally well in habitats such as forests, grasslands, mountains and even deserts. Over the last couple of years, they have also become used to urban areas and human presence.

In the wild, foxes dig burrows in the ground which are called ‘dens’. These dens are their homes and provide them with shelter from harsh weather and predators, food storage, sleep and a safe place to give birth to the young cubs.

In urban areas, they often make their dens under wooden constructions such as your shed and even your house.

They mark their territory by urinating and this is also a signal for their presence and a way to communicate with other foxes.

What Do Red Foxes Eat?

Red foxes, like other species of their family, are omnivorous and opportunistic eaters. Their diet can range between meat and fruits, but they prefer meat. They hunt small mammals such as rats, mice, voles and often squirrels, plus rabbits and hares.

However, foxes are also a bit lazier than other animals who hunt for their food. That means they will feed on animals if they can easily catch them. This is also one of the reasons why foxes attack people’s poultry and rabbits. The animals are already in cages and have nowhere to run. If the fox can get access inside of the cage, you can be sure it will kill all your animals.

Foxes would also eat fallen fruit in the wild and in your garden. Other food that attracts them to your home is pet food, rats and mice if you have an infestation, and birds that feed in your bird feeders and water sources.

On rare occasions, if food is scarce, they may resolve to eat vegetables, fish, frogs, and even worms. And in an urban area, they can often be seen scavenging for food in garbage bins and eating food scraps.

Learn: How to get rid of foxes in your garden?

When Do Red Foxes Mate?

The mating season for red foxes begins in late December and continues until the end of March. Peak months for breeding are January and February. The female fox gives birth between March and April and the young ones start getting out of the den at about 12 weeks of age.

Foxes often live in pairs or in groups, they are solitary animals. However, during their mating season, once the male has chosen a vixen, both can be seen living and hunting together for a couple of days. Between one and six days, the female is in a period called estrus, which means that she is ready to be mated by the male.

After the pair has mated, the male will leave the female. Sometimes the males even go out to look for another female to mate with.

How Many Kits Do Red Foxes Have?

Like dogs, fox litters aren’t big. The most common case is a litter that consists of four to six kits. On rare occasions, usually in environments where the fox mortality rate is higher, bigger litters can be born. Some may even consist of up to 13 kits.

Currently, red foxes do not have such a status. The IUCN claims that the mammals’ population is stable and does not consider red foxes to be endangered. In fact, they also say that their highest population density is in the UK. Up to 30 red foxes per square 0.5km can exist. However, in the UK the red fox population has fallen by about 41% from 1995 until 2017.

There are several large threats to the red fox population, mainly habitat losses and fragmentations, plus exploitation and hunting. Habitat loss is the most serious of them all. Luckily for the species, they are very adaptable and can live in different conditions, which is also one of the reasons foxes have been regular visitors to urbanised areas and people’s yards. They come to look for food, which their natural habitat offers less of.

In the UK, there are some strict rules about dealing with foxes on your property and you can get a serious fine or even get jailed if you do not follow them.

Spotted fox in your garden?

Note that we only aim to provide some useful information about red foxes.