There are numerous separate fly species each of which has a different appearance. The majority of flies have bean-shaped bodies, often dark brown in colour. True flies are distinguished by other insects with “fly” in their names (such as dragonflies, butterflies and fireflies) by their wings. Flies have a single pair of transparent flight wings, attached to the mesothoracic part of their body. In contrast, most other insects have a dual pair of wings and are rarely transparent. They also have compound eyes. 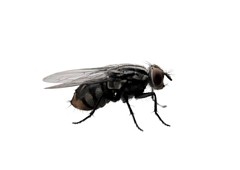 It carries more than 100 pathogens, including salmonella, typhoid, tuberculosis, anthrax, cholera and dysentery. House fly is an umbrella term for two different species of flies. Both share the same appearance. House flies are mostly grey and have a distinct dual stripe on their thorax. The only difference between them is the size—the Common house fly reaches 5mm up to 8 mm in length, while the lesser house fly can reach between 3mm and 6mm in length. 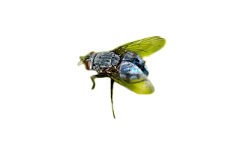 Its appearance is similar to the appearance of the House fly. Bluebottle fly is blue in colour, with a shiny tint. Even though bluebottle infestations are infuriating, these insects can also be beneficial to humans. Sterilised larvae of the bluebottle fly are used in maggot therapy. The larvae are introduced into wounds of a human or animal where they eat the dead tissue and leave the healthy one intact.

It has a painful bite that can cause infection in animals. They bite humans as well, though their bites rarely result in infections. They have a scissor-like mouth and pointed rear end. Horse flies are dark brown in colour, with shiny green or black eyes. They are also bigger in size and can reach up to 25mm long. They spread various blood-borne diseases and can suck up to 300mm of blood from an animal a day.

Check also: Types of Flies in the UK

There are many flying insects but there is a reason why true flies are called “true”. While not as enduring as other winged species, flies can still travel over several miles a day. Their specific compound eyes give them a wide vision of the field and allow them to detect any movement.

This is the reason why flies are so hard to kill with yesterday’s newspaper. Because of the specifics of their mouths, house flies and horse flies feed only on liquids—blood, plant sap, fruit juices and water. Bluebottle flies feed on rotten organic material and faeces.

Scientists have reported some strains of house flies and bluebottle flies are resistant to the most common pesticides used against flies. Flies have demonstrated high tolerance levels to neonicotinoid, pyrethroid and nithiazine.

It is also important to note there is a possibility house flies carry antibiotic-resistant bacteria from animal farms to urbanised areas. This might be an answer to the question of how some bacteria strains develop resistance to medications at such rates.

Spotting a few flying insects in your home doesn’t mean you have a fly problem. Even if you do, the source of the infestation must be located before any measures are taken.

If flies are a permanent sight around your property, there might be a food source nearby which allows them to breed. Search for maggots and rotten organic material near your premises. You may also observe clusters of dark spots on your walls—faecal matter of house flies.

The most common fly species in the UK: house flies, horse flies and bluebottle flies, are attracted by rotting organic material and excrement. Carcasses of animals such as dead rodents are the perfect breeding ground and flies are among the first species to lay eggs inside the corpse.

A batch consists of up to 200 individual eggs. Combined with their short week-long life cycle, this results in massive infestation in a matter of days.

Read: How to Get Rid of Flies

How to deal with a fly infestation inside your home

There are a variety of methods to battle house fly infestation. Insecticides, sticky paper and electronic fly zappers. You can also find countless homemade remedies online, although they are not very effective. Zappers won’t do for bluebottle infestations. Sticky paper attracts them but since it doesn’t affect their breeding ground, it doesn’t stop them from reproducing. Professional fly control service remains the most effective method to battle flies infestation.

Get your home inspected by a certified pest technician!

Keep in mind that we only aim to provide facts about flies in general. We cannot guarantee that what you're dealing with corresponds to the same description.