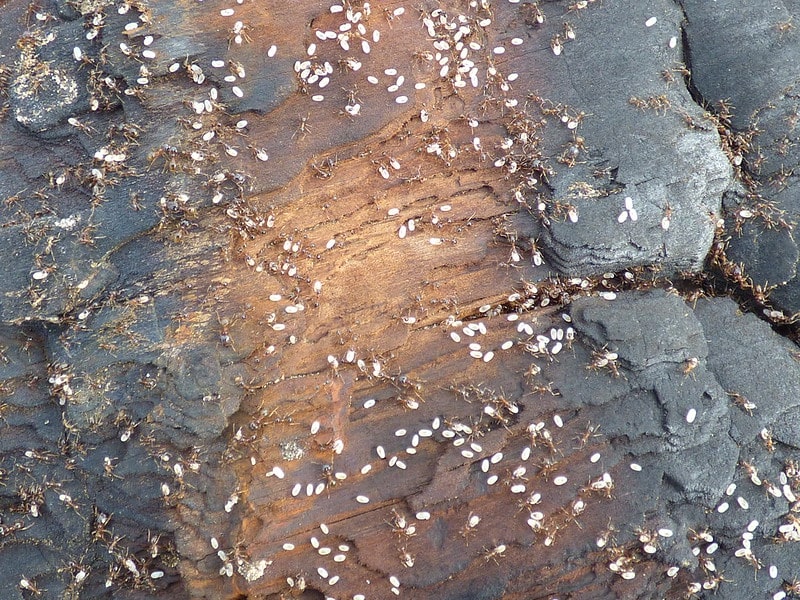 Ants live in exceptionally well developed and organised communities. They inhabit colonies with very clear hierarchical structures. These insects are a good example of how complicated can nature be and how even the smallest creatures live according to specific laws. They are extremely codependent for the sake of the survival of their queen and colony.

Ants' life is dangerous and quite short, which is why they reproduce fast. They have highly evolved social systems. There are different types of ants in the colony, and everyone has a different job to do. Every colony has one queen responsible for founding it and constantly producing new eggs which lead to the growth of the colony. She is the mother of all ant workers who tend to her and expand the colony to the soldiers who defend the nest.

The biggest challenge for every ant queen is to find a new colony and give it life. She is the only female ant that can lay eggs, the rest of the female population, known as worker ants, is in fact sterile. The workers have another significant role to play in the colony hierarchy - taking care of the mother queen and all-new eggs, securing food and defending the colony.

Once a queen reaches the adult phase, at certain times of the year, usually in the late spring or early summer, she flies away from her home in search of male ants to mate. In this solitary journey, many fall victims to predators, other ants, drowning and many other dangers out there. The queen that successfully mates and finds a place to settle, digs her new chamber underground or in trees to lay her first eggs hoping to build a strong colony. The queens of some species can lay up to millions of eggs.

Having an ant colony in your property?

Rely on the experience of professional pest control technicians to get exterminate the vermin.

The Stages of the Ants Colony

Every ant colony goes through three stages of development. The first - the founding stage, when the queen mates and creates her own colony. After the first workers are born, the colony goes into the ergonomic stage. During this time, the focus is on the nest expansion, raising more ant workers and conquering new territories. The third stage is the reproductive one. Now the colony is strong and stable. The queen has reproduced enough workers to guarantee the survival of the colony. She will begin producing virgin queens and males. Once they enter their adult phase, they will leave the nest at the mating season to begin the entire cycle anew. It may take a single season or up to five years before the colony is large enough to enter a reproductive stage.

The life cycle of an ant

At the beginning, after laying the first eggs in her new nest, the queen takes care of them. During this time, she uses her stored fat reserves and wing muscles for nourishment. After the first adults emerge, they take over the role of tending to the eggs and larvae.

The ant eggs have an oval shape and are tiny, about 1 mm long and 0.5 mm in diameter, white and transparent. The only exception is the eggs from which a new queen will develop - they are quite bigger than the rest.

Their surface is smooth and sticky, which in return makes it easy for the eggs to conglutinate. Together they form a mass easily transported by the workers around the nest. Not all eggs have the chance to reach the next phase and undergo metamorphosis. Some of them do not develop and become food for the queen and the larvae.

The queen controls the sex of her offspring. The laid eggs can be differentiated into two groups: fertilised and unfertilised. Due to the nature of these insects, the fertilised eggs hatch female ants - queens, workers, soldiers, whereas unfertilised eggs will hatch male ants.

Once the queen has produced enough eggs and her colony has a stable population, eventually, she will lay eggs that will develop into new queens and males. They will fly off and start new colonies on their own.

The larvae hatch from the eggs after a period of 7 to 14 days. They too are transparent and have a worm-like form with no eyes and legs. At this stage, the future ants begin feeding with food and juices regurgitated by the adult ants. During this stage, they need a constant supply of food which results in their rapid growth. Future queen ants are fed more than the rest who will become the workers of the colony or male ants.

The larvae undergo periodic moulting, and with each moult, they grow hairs, some of which are hooked. The hooked hair enables them to attach themselves together for easier carrying by worker ants.

Once the larva reaches a certain growth stage, it forms a silk-like cocoon around itself and pupates. It takes around a month for the larvae to transition into the next stage of development. During this phase the ant metamorphosis into its adult form. Also, it is time for rest and reorganisation after the growth spurt during the larva period.

Pupas are white, waxy on the outside and gradually become darker. At this stage begins the forming of the ant’s antennae and legs, which are folded against its body. The pupae of some species spin a cocoon for protection, while others remain uncovered, or naked.

There is an exception with some ant species - for example, the Lasius niger, which does not undergo metamorphosis into pupas.

The entire cycle, from the queen laying the eggs to the final stage of a fully developed adult ant, may last from six to ten weeks. The baby ants that come out of the pupas are very pale, soft and weak. However, they need only a couple of hours for their exoskeletons to harden and for them to get stronger and change their appearance by getting darker. Depending on the species, ants can be black, red or brown.

The adult ants have six legs, and a body that is segmented into three parts: the head, thorax, and abdomen. On their heads, they have mouthparts which they use for eating and excavating, as well as two antennae which are sensory organs. Antennae are essential for the ants’ sense of smell and touch. Worker ants use their sense of smell to lead other ants to sources of food, to recognise friends or enemies, and to establish territorial boundaries.

After the final metamorphosis, the ants begin their next phase as workers or soldiers, queens and males.

In need of professional ant control?

Some queens may live up to 15 years, even decades, with the right conditions. Initially, every queen has wings to fly away in pursuit of males to mate. A queen may copulate with several males during her brief mating period, however, she never mates again. She stores sperm in an internal pouch located near the tip of her abdomen. There the sperm remains immobile until she opens a valve that allows it to enter her reproductive tract to fertilise the eggs.

Once the queen settles to lay her eggs and form a new colony, she will tear off her wings. She uses them only once for her first and only flight. For the rest of her life, she will stay in her nest laying eggs. The workers will tend to all her needs. The queen is the most important ant in the colony. She is the mother of all ants, the source of life and future in every colony. If the queen dies the colony will come to an end. There will be no new eggs to replace the dying ants.

The male ants have wings and their only purpose, once they have reached adulthood, is to fly away and mate with queens. They live only a couple of weeks. These ants are the same size or a bit bigger than the worker ants and have small heads with large eyes. Once they have mated they die. The male ants have no other responsibilities in the colony.

Worker ants have no wings and typically survive several months with some exceptions of workers who can live up to seven years. They can not reproduce. The responsibilities of the female worker ants may change with age and different groups specialise in different activities.

Usually, the young workers are closer to the queen, tending to her and the eggs, feeding the larvae. The other workers are busy with building and expanding the nest, gathering food and making sure the queen is always taken care of and safe.

The most important task for the workers is to control the nutrition of the larvae all the time. Depending on how much they feed them determines the kind of ant they will become. For example, if the colony comes under attack, the workers will ensure that more larvae become soldiers. If they notice a deficiency of food, the workers will feed more larvae to grow into workers and help with gathering more food.

As you can see, ants live in well-organised societies. They have difficult lives, and it is no coincidence that we know them as hard workers. Their survival depends on their dedication, hard work and love for their queen.

They are active and on the job all the time. All their efforts are dedicated to foraging food, building their home, defending it, feeding and looking after the population and grooming their mother - the queen.

Because their species is very vulnerable, they propagate in large numbers. A queen has to lay so many eggs at a time because the period it takes for an egg to become a fully developed working ant is quite long and at the same time, the regular worker ant lifespan is quite short. The queen has to compensate for any loss of life and guarantee a stable population that will expand her colony and sustain the life within it.

Each and every ant from the colony from a very early stage knows her purpose and role in her big family and contributes to the well-balanced economy of the colony.

If you are experiencing an ant infestation in your house, you should seek professional assistance as soon as possible.

Spotted ants in your kitchen?

Note that we only aim to provide some useful information about how to identify ants in each stage of their life.