Flea Bites: All You Need to Know

Flea bites are a major pain to deal with, literally. The marks can look like ordinary mosquito or bed bug bites, which makes it even harder to determine the type of pest that bit you. And let us tell you this: It’s really important to find out what sort of bug was munching on your hand or you can end up in the hospital bed with a fever and swollen up lymph nodes.

In this guide, we’re going to cover everything you need to know about flea bites including what do they look like, exactly how dangerous they are and of course - the way to treat them. 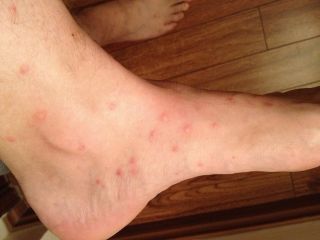 Generally, flea bites are small in size, red, with a bumpy texture and a light, pinkish circle around them. Flea bites on humans are typically concentrated into small clusters of up to four or arranged in a line. And what do flea bites look like if you are allergic to them? Well, the sight isn’t pretty. Symptoms include swelling, redness, and many small bumps that resemble pimples.

How long do flea bites last on humans?

It really depends on the type of skin and whether you develop an allergic reaction. If you’re not on the sensitive side, the bite will be gone in one or two days. However, if you develop some kind of reaction to the flea bite, you’ll have to deal with a nasty rash for up to two weeks. In rare cases, some people get infections and the healing process can become even longer. Still, this scenario is very uncommon and even if it happens, you can’t miss the symptoms because they are quite serious. Signs of an infection include inflammation, pain, and swollen glands.

How to stop flea bites from itching?

Like with most bug bites, the flea ones are REALLY annoying, but you need to forget about scratching the injured area of skin, otherwise, you’ll end up with an infection. Instead of irritating the marks, even more, try to wash the bumps with water and rub some over-the-counter ointment on them. There are many medications on the market that will relieve the pain and prevent infection development. Below we have listed a few products that you can try out:

Want to ged rid of the fleas in your property?

Protect yourself and your family with professional flea treatment.

What diseases can you get from flea bites?

Fleas may look small and innocent, but they carry quite a big number of dangerous diseases. Here are the most common ones and their symptoms:

Yes, you read this right. Fleas can transmit the Bubonic plague disease. The sickness is generally spread by small animals, like rodents, that are hosts to the bug. Interestingly enough, the flea itself isn’t affected by the disease, it only transmits it to the carrier, who will transport and spread the bacteria. Once a bug has bitten its host, the bacteria will travel to the lymph nodes through the lymphatic vessels, causing it to swell up. If you get exposed to the bacteria, you will start to experience flu symptoms like fever, headache, and vomiting. These signs start to develop from one to seven days after the bacteria has entered the lymph nodes.

Generally, this disease is carried by rats and cats that, like with the bubonic plague, serve as a host to infected fleas. You see, when a flea bites you, it will defecate while munching on your skin. Here is where it gets real messy: Once the bug has bitten you, a bacteria called Rickettsia typhi enters the wound through the faeces. And that’s not even half of it. You can also get Murine typhus from a person near you who is scratching his bite marks. Typical signs of this disease include fever, headaches, nausea, and body aches. In about five or six days after these symptoms begin, a rash will start to develop on your torso which will then spread down your legs and arms. If you notice any of these symptoms, you need to visit your doctor ASAP. Typically the medication used to cure Murine typhus is an antibiotic based one, still, you need to act quickly, if you don’t want to end up in the hospital for a longer period of time.

This sickness is spread by cats that have been bitten by fleas, and also by mosquitoes and ticks. Mycoplasma haemofelis is a parasitic bacterial disease that leads to an infection of the red blood cells. If a flea carrying this sickness bites your feline companion, the animal can develop health problems like fever and anaemia. And your pet cat isn’t the only one that can get sick from Mycoplasma haemofelis - there is medical evidence that humans bitten by infected fleas can also catch the disease, especially those who have a weak immune system.

Another serious disease that is transmitted by fleas is Tularemia. The sickness is rare, but still very dangerous because it affects the skin, lymph nodes, lungs, and eyes. The main victims of this disease are rodents, rabbits, and hares. And it doesn’t stop there - domestic animals like cats, dogs, hamsters, and birds can also get infected by the so-called bacterium Francisella tularensis. Again, Tularemia doesn’t affect just animals - you can also get sick if you get bitten by a flea carrying the disease or if you have contact with an infected mammal.

As you can see, fleas may be small but the damage that they cause is definitely not proportional to their size. Besides the above-described diseases, the tiny villains can be the root of other serious health issues like:

How to treat flea bites on humans?

There are so many flea bite treatments that you can try, both natural and medication-based. If you are not a big fan of strange smelling ointments, here are a few home flea remedies to try out:

If you are dealing with an infected rash, it’s definitely better to turn to specialised medications and creams like calamine lotion, antihistamine, and cortisone. And it’s needless to say that if your bite marks don’t go away or get even more infected, you have to visit your doctor ASAP.

Fleas may be small, but they can cause big health problems, both to you and your pets. If you become a victim of a flea bite, make sure to use the required medications and NEVER scratch or irritate the injured area in any way. Not only that, but you should take measures to eradicate the fleas population. If you suffer from an excessive infestation, act fast and book a professional flea treatment, or you will surely be bitten again! We highly advise you to visit your physician if you spot any complications like the ones we’ve described above.

Still not sure if the bites are from fleas?

We only provide valuable information regarding flea bites and the possible diseases they can spread. But we as a commercial service provider cannot give you medical advice.